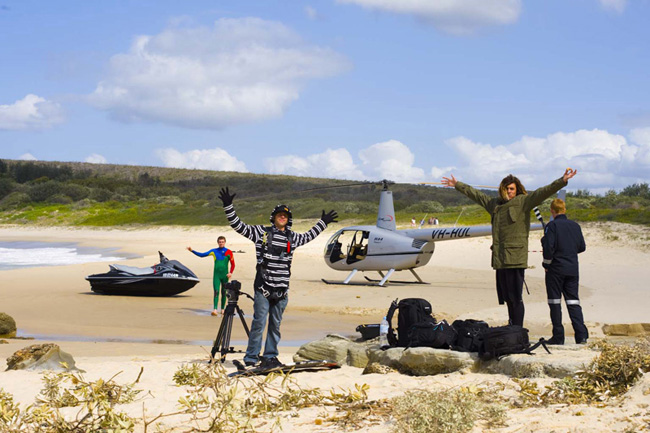 The photo’s you see below were taken during a helicopter shoot for Craig Anderson’s Innersection sometime last year. It was the only time a chopper was used in Innersection and it gave Craig’s part a point of difference. It was good to see the ol’ chopper brought back to life after a rather long hiatus. Craig managed to snag a bunch of keepers from the two sessions at a secluded beach break south of Newcastle. Matt Bokor (Craig’s main filmer) was using Taylor Steeles RED camera with Rod Owen shooting the stills. The two lensmen took turns in the chopper with Rod shooting from land in the morning using the bird as a back drop and visa versa in the afternoon.

The Pilot was an incredible driver and had to be seen to believed. He would land on the Northern end of the rocks to save petrol. Seconds before Craig would take off he would hover sideways 1-2 meters above him. Not to mention flying on a angle so that the wind generated wouldn’t ruin craig’s sections and blow the board from under his feet.

Craig came a close second in Innersection behind Matt Meola, who won a sweet 100k for his efforts.. It was so close, you could’ve flipped a coin to determine the winner.

Huge thanks to Rod Owen and the guys at Tracks Mag. You can see all the photos and the full story in print in the new Tracks Mag which is out at your local newsagency right now! Check both their cyber sites below.